If you’ve recently been startled by a large dark beetle with long antennae, you’re not alone. It’s most likely the 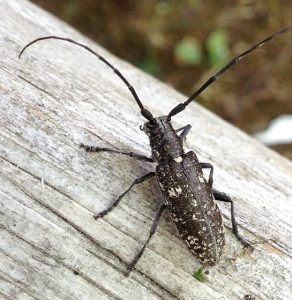 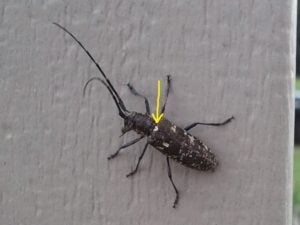 , and they’ve been having a banner year. They are a native species of wood-boring insect that is found throughout the Northeast, and in the Northwest to Alaska. They are commonly mistaken for the dreaded Asian longhorned beetle (ALB), which has not yet been found in Wisconsin. White-spotted sawyers are a bit smaller, duller in appearance, and have a distinctive white spot between their “shoulders”.
Adult beetles feed on conifer needles and the bark of twigs. Females lay their eggs in the bark of recently dead, felled, or weakened trees (white pine being their preferred species). Fortunately, they are unable to survive in healthy trees. Larvae burrow into the wood, tunneling their way through for the next one to two years before pupating and continuing the cycle. Typically regarded as an ecologically important species, they actually help speed up nutrient cycling by breaking down the wood of trees that are already in decline. Recently cut log piles, trees stressed by drought or high water levels, and/or storm-damaged trees are susceptible to infestation.
It should be noted that there have been reports of white-spotted sawyers biting when handled, which feels similar to a bee-sting, so caution should be used in the case of a close encounter. In all of my run-ins with them, I’ve never been bitten or chased down by one of these beetles. They’ve landed on me and I’ve simply brushed them off. They land on the ground, seemingly stunned, and we both go on about our business.
If you are unsure of whether the beetle you’ve found is an Asian longhorned beetle or a white-spotted sawyer, you can bring pictures (or the beetle itself) to the UW-Extension office in the lower level of the Natural Resource Center for identification.

We teach, learn, lead and serve, connecting people with the University of Wisconsin, and engaging with them in transforming lives and communities.

Connect with your County Extension Office »

Find an Extension employee in our staff directory »

An EEO/AA employer, University of Wisconsin-Madison Division of Extension provides equal opportunities in employment and programming, including Title VI, Title IX, the Americans with Disabilities Act (ADA) and Section 504 of the Rehabilitation Act requirements.